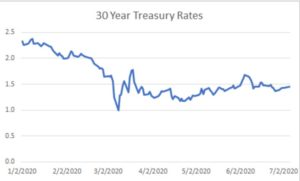 The U.S. stock market rose over 20% in the second quarter despite the fact that the pandemic is still with us and the number of infections is rising in many places.  The most common question we get is why is the market so high? Here’s our take.

COVID-19 has knocked the economy off its rails prompting the Federal Reserve to embark on an array of emergency actions. Those actions have reduced interest rates. Intuitively it might seem the Fed is no match for a pandemic. We’ll show the power of the Fed or at least the importance of discount rates.  Along the way it will become clear why the stock market can seem so detached from the economy.

The following chart shows the decline in the interest rate on a 30-year U.S. Treasury bond and how it has ranged from about 2.25% to 1% . 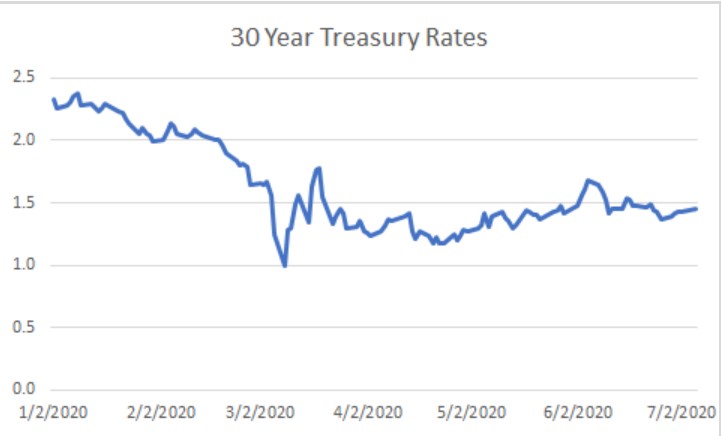 The pandemic has been negative for the economy, causing revenues to fall which leads to lower profits and smaller cash flow payments (dividends and share buybacks) for investors.  The Fed has intervened to lower rates.  By itself, this is positive for bonds and stocks.  So which impact is stronger?

Imagine investing in a stock index fund.  Dividends over the next year are projected to be $2 and will grow at 4% annually.  Let’s further assume that investors discount the future dividends at a 6% rate.  A simple and classic valuation model prices the fund at $100.  If the discount rate falls by 1% to 5%, then the value of the fund would double.  Changes in interest rates, which are influenced by the Fed, have a huge impact on security prices.  We use this example to make the point that the Fed’s power is immense. Hence the aphorism “Don’t fight the Fed.”

Volatility will Mirror the Pandemic

In the other corner we have the pandemic.  How much of a drag it will exert on the economy and corporate profits remains to be seen.  To estimate the pandemic’s power, let’s consider the same valuation model under a few different scenarios.   What if the pandemic causes investors to delay cash flows by a year?  Instead of paying $2 over the next year, the fund pays nothing and then pays $2 the year after.  From then on the cash flows grow by 4%.   In that scenario, the fund would be worth $100 in one year (not today). If we discount that to today, the value would be about $94 or 6% less due to the pandemic.  If the pandemic causes investors to delay cash flows by 2, 3, 4, or 5 years the value of the fund would drop (from $100) by 11%, 16%, 21%, or 25% respectively.  These are significant differences and stock market volatility will continue to mirror the uncertainty of the pandemic.

The point is that the Fed’s influence on rates is a powerful offset to the drag of the pandemic.  More generally, stock prices can rise in the face of diminished growth expectations if discount rates fall enough.  That’s our explanation for stocks appearing to be disconnected from the economy and why stock prices seem high given seemingly deteriorating economic conditions.

Stock markets are less volatile than they were earlier in the year but more volatile than they have been over recent years.   We hope we’ve made clear the large impact changes in interest rates and growth expectations have on stock values.  As long as the  pandemic causes greater uncertainty we expect volatility to remain elevated.

We’ve been pondering what markets will do after the pandemic.  Wharton professor and author of “Stocks for the Long Run”, Jeremy Siegel, has some interesting opinions.  He is calling for rising interest rates and rising inflation over the next several years.  His views are based on the increase in money supply engineered by the Fed and the stimulus from the Federal government.  He makes an excellent point that today’s stimulus is different from that in  2008-2009.  Then the money sat on the balance sheets of banks and did not find its way into the real economy. This time, the money is finding its way into the real economy.

The market does not seem to agree with the professor.  The market expects a 1.3% inflation rate over the next 5 years and 1.5 over the next 10 years based on the difference between nominal and inflation-protected Treasuries.  We’re of the opinion that such predictions are difficult to make.  The Fed could raise rates and quash inflation as it did under Paul Volcker in the early 1980s at the risk of creating a recession.  Inflation has not been present in recent years because we’ve seen increased supply in energy and production.  We are of the opinion that future unexpected inflation is a risk.  A risk of unexpected inflation is not the same as a prediction of unexpected inflation.   If our opinion does not change then at some point we will likely add inflation hedges to our portfolios.

We remain unwavering in our view that investors should commit to an investment allocation based on long term return expectations, their willingness and ability to take risk, and their financial goals.

Summary. In response to the recent inversion of the U.S. Treasury yield curve, Red Tortoise’s investment committee voted to reduce the weightings to equity by 5% across all risk levels.

Unusual times call for unusual actions.  We loathe trying to time movements in the stock market, and our capital market forecasts have a horizon of ten years.   In this circumstance however, both data and theory support reducing equity exposure.  Here we explain what the yield curve is, what its shape suggests, what inversion is and what it signifies.  We also describe what has happened in the stock market after previous inversions.  It bears repeating often and loud that past performance is no guarantee of future performance.  We will also note our reasons why this time might be different.  Finally, we discuss what might cause us to reverse the call or move further.

The interest rates implied by bond prices are called yields.  For our purposes, we are only looking at the 10-year Treasury Note and the 3-month Treasury Bill.   Here’s the concept.  Interest rates are the prices paid for borrowing money.  As demand for money increases relative to supply, rates rise. As demand falls, so do rates.  In what’s called a normally shaped yield curve, the curve slopes upward meaning that interest rates on longer term bonds are higher than shorter term bonds[i].   An inverted yield curve occurs when the rates on longer term bonds are lower than shorter term bonds[ii].

When longer-term rates are lower than short-term rates the bond market is signaling that future demand for money will be lower suggesting a weaker economy, even a recession[iii].

At Red Tortoise, we believe markets work well (not perfectly), and investors discount what they expect to happen in the future.  Markets try to predict the economy and as a whole do a reasonable job.  Therefore, we don’t try to use current economic conditions to predict the future. Rather, we think the market is a predictor of the economy.  The future is hard to predict, even for markets. So let’s look at some data.

Going back to 1962, we collected the data and found 51 events defined as when the spread between the 10-year and 3-month rates went from positive to negative.  On average, the stock market as represented by the S&P 500 index was lower over the next 1, 3, 6, 9, and 12 months with the lowest average decline occurring at the 6 month mark.

In short, the economic theory that an inverted yield curve suggests a weaker economy ahead combined with historical data is the basis for our decision.   The investment committee further decided that absent new information we would unwind the trade in 6 months again based on the historical record.

What could cause our call to reduce equities to go wrong? While the 51 inversions that we identified preceded negative stock market returns on average, not all were negative.    About 2/3 were negative and 1/3 were positive, including one six-month period which was up 22%[iv].   So even based on history, the market may go up from here.  Topping our list of what could go wrong is that the Fed might take action to stimulate the economy.  Additionally, the government might take action which would be stimulative such as reversing tariffs.

We will continue to monitor markets.  Absent any changes we would unwind this trade in 6 months.  We also might reverse the trade earlier should we see strong signs of strength.  Should we see signs confirming greater weakness we also might further reduce our equity allocation.

[i] There are three main theories for the shape of the yield curve.  The liquidity preference theory says lenders require more interest to lend money for longer periods.  The preferred habitat theory says that some borrowers and lenders prefer particular time periods and this supply and demand dynamic plays out at different maturities.  The third is the expectations hypothesis which is that the yield curve is a harbinger of future rates.  For example, if the rate on one year borrowing is 1% and the rate for two years is 2%, then one can infer that the one year rate will be about 3% one year in the future.  The idea is that the two year period is made up of two one year periods.  If the first year is 1%, the second year would have to be 3% for the rate to average 2% over two years (we’ve used some simplified math here).

[iii] We’ll be happy to send you additional research on this, just ask.

[iv] The 22% rise occurred after the inversion on October 28, 1974.  The economy had entered into a recession in November of 1973 which ended in March 1975.  The yield curve inverted on June 1, 1973. The investment committee looked at the 1974 inversion and concluded it was not representative of the current environment because we are not now in a recession.